Tonight my troop finished up the Leap Bot Badge, and there is definitely a learning curve for it. While the instructions for the actual construction of the bot are not awful, there are some tricks that make it easier for everyone involved. I’m not going to address the badge as a whole, just the construction of the bots and the stands since this is where we had the most grief, and I want to prevent other troops from getting frustrated.

The Bots: The badge book says to have the girls use different sizes of spools, but by doing that, you’re increasing the number of variables into the experiment. All of my girls used the same size wood spool (2 1/8″), with different lengths of wood dowels (1/4″ in diameter in 12″, 18″, and 24″ lengths). They decorated the spools using pipe cleaners, markers, and googly eyes.

The Stands: For the construction of the stand, we followed the instructions by using duct tape to attach the dowels to 6″ cardboard squares. Duct tape and cardboard does not hold up under repeated (aggressive) leap bot tests. If I did this again, instead of using duct tape and cardboard, I would make the base out of a 1″x6″ board, cut into 6″ squares. I would drill a hole in the center and use wood glue (or some other heavy duty glue) to make sure the dowel remained steady. It would take extra work on the outset, but taping and re-taping the stands for 16 girls while trying to help them troubleshoot their testing outcomes is not fun for anyone. 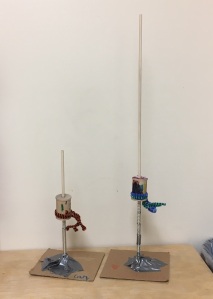 The Springs: I picked up a ton of compression springs from Home Depot in varying lengths (1/2″ – 3″) to give the girls choices when they changed a variable during their testing – how much “leap” does a 1/2″ spring provide compared to a 3″ spring?

Leaping: So next to the instability of the duct tape and cardboard stands, the biggest problem we had was successful leaping. Some of it boils down to how you push down the spool, but even when varying that technique, the girls were still having trouble getting their spools to really leap because the end of some of the springs were getting caught on the hole in the spool. My co-leader solved this problem by having the girls add a washer. Assembly order on the dowel: springs, washer, spool. This made a world of difference. 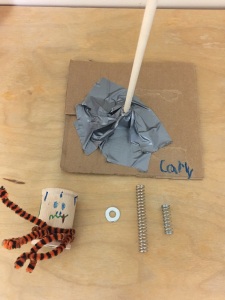 Leaping Technique: If everything else is going smoothly, but the girls still can’t get their bots to leap, how they press down on the spool effects how high (if at all) the spool will leap. 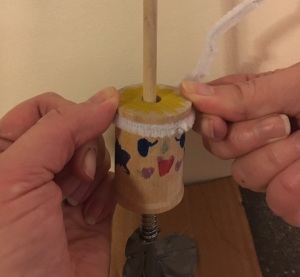 Press tips of thumbs on the top edge of spool and push down. If too much of your thumb is on the spool, it will prevent the bot from leaping very high. 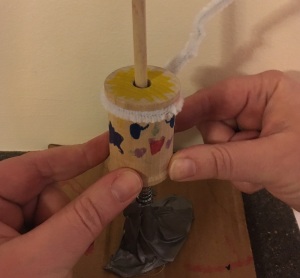 Using tips of thumbs/pointers, press on the bottom edge of the spool, then push down.